Yesterday I got into the city of Philadelphia-
I saw the Liberty Bell and toured "National Hall", and drove past the PA Art Museum.

On the way back to the hotel yesterday I heard about an exhibit at a London Zoo where humans (voluntary-I hope?!) are on display in a "natural" setting.
I suppose it is alot like the scene in Slaughter House 5 where Billy and Montana are on display in an alien zoo on another planet.

The people who run the Zoo (the one in London) are trying to make the point that humans are merely animals ("Humanimal" is the word I think) and there is not much difference between us and them.

I think a better experiment would be to put the Zebras and Lions in charge of the office and see if anyone notices a difference in the administration and care of the Zoo. Truly, some people are very stupid.

However, earlier in the day I had walked though historic areas of this country-- which was crafted, drafted, and created by somewhat ordinary men in an extraordinary time and place. In the midst of much thought, character, values, integrity, courage and ideals between some 50 men, our country was established.

The power and creativity of the human mind seems to have no limits. Our ability for greatness and absurdity, goodness and evil, courage and cowardice, extends beyond even our power to comprehend it. Just as we can not ever know how far the universe
extends, because it continues to expand, we also can not know--or even fully guess-- the limits of what the human mind can accomplish.

It struck me as rather profound that I would experience the 2 extremes in the same day. Of course, a trip to the Bone Marrow Transplant program at Duke Hospital, and then a quick visit to the local Wal-Mart would have given me a similar experience!

Anyway, we as a nation seem to have lost touch with our roots. We as humans (well, some, but not me!) seem to have lost touch period. I would ask anyone who thinks we are "just animals" functioning on a higher plane, to walk into a neurological unit at any hospital, or take a close look at an Black Hawk Helicopter at your local state fair, or just read anything by Tony Blankley! (Or CS Lewis, or Emily Dickinson, or Robert Frost!)

The folks in London, for whatever reason, want to give humans yet another reason to just be stupid. I say, let the lions in...see how many idiots we can eliminate from our gene pool, then send a few over to congress. I imagine good old Ben Franklin would heartily agree! 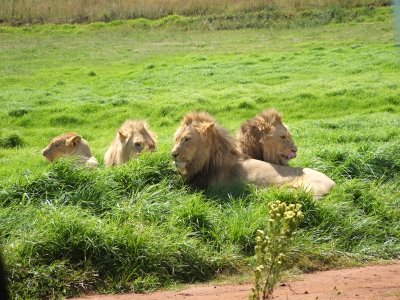