Leadership is absent of consensus

Today, like the 100 times before, I drove through Jacksonville NC. My In-laws have a home near the coast and I have been more times than I can count. This time though, as I drove past the base housing and the main gate (Piney Green) of camp Lejeune I saw more "welcome home" signs than I have seen in the last dozen visits or so.
I read as many as I can, but today I had to pull over and take a few pictures to share with you. 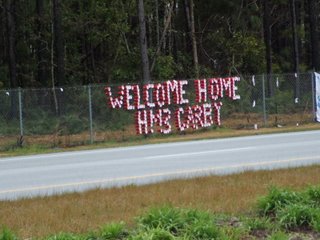 A USA Today poll over the weekend states that more than half of Americans have been touched by the war and that nearly 3 to 1 of those say the impact has been negative.
6 in 10 say a close friend, family member, or co-worker has served in Iraq, and 1 in 10 say that someone close to them has been killed or wounded there.

HMMMM...Lets see. In general, and I am including myself here, most Americans are spoiled, tender bellied, and mostly after the pursuit of happiness.
A great deal of the generation in charge, the Baby Boomers, are among the most self centered and apathetic group of Americans that our history has yet to produce. Their parents, who fought in WWII, and whose grandparents fought in WWI, as well as lived through the Great Depression were determined that the next group of kids to come along would have the American dream and it is a nightmare we live with to this day.

The people of my parents generation, and my dad turns 60 this year...My mom 56, were given creature comforts, technology, education, and opportunities like no other generation before them. I suppose it is possible that at the time of the Egyptians, the privileged classes did the same to ruin their kids, but I can not read the writing on the walls, so to speak, so I don't know!

I do know that in the era of my parents teens we faced the first real protest against war. Prior to the 60's everyone got behind the push and did what was necessary to make the USA succeed. The 60's roll along and suddenly we've got moms and dads and mushy headed teenagers...Not ALL mind you, but quite a few, who have a French mindset and just don't want to fight anybody, for any reason. Make love, not war...

My dad was on a sub towards the end of the Viet Nam conflict and did not see any action, my Uncles were both in combat. My mom, who was a teenager when her brothers went to fight, as well as being a Coast Guard kid, was heartbroken and horrified at the reactions people had about the war. I will never forget my moms insistence that supporting the troops was the most important thing she could do, and would stand up to anyone who had something negative to say about the soldiers.

I continue in her stead.

As far as the poll I mentioned above stating that the war has had a negative effect on many Americans, I have to say, "DUH!!!"
No one likes war. No one likes the toll it takes on the country. Ask any American if they could choose between Easy or Hard, most would pull out their "Easy" button from Staples. Most of us do not want to work as waiters, or fry cooks, or check-out girls at Wal-Mart, this is why so many immigrants have jobs here!
And war??? You mean, you want me to go to war? And stop killers, and build schools, and dig ditches??? Are you crazy?

A NEGATIVE impact is what is to be expected...War hurts.
BUT THERE IS NO VICTORY WITHOUT DEFEAT!
AND NO PEACE WITHOUT VICTORY!
Let me say that one more time...

THERE IS NO VICTORY WITHOUT DEFEAT!!!
AND NO PEACE WITH OUT VICTORY!!!

I am tired of the hits on President Bush. I am not in his inner circle but I believe in him. I know he is a Baby Boomer, but so was Bill Clinton, and by Heavens, there is a difference in the 2 men!

There are layers and layers of political and economical crap that we have to sort, shift, and cut through to understand what is happening in Iraq. If we lower our eyes and listen to the way the liberal media presents it's findings, you will discover yourself in a bog of information that is both mis-leading, and depressing.

I REFUSE to be either...And so should you.

The one thing I find comfort in, the one thing that makes me want to dig in and yell a little louder, is that the President has not wavered in his stand against terrorism. He is pushing forward, eyes on the prize, and to Hell with CNN and the Democratic party pushing against him.

Negative experiences do not always result in negative outcomes. Ask any mom about the delivery of her baby...Most will tell you it hurt like mad, was scary, and nearly ruined their bodies for a while...But would they do it again? I have yet to meet one who said NO.

Can you imagine a group of pansy liberals around the bed of the mom deep in labor and their comments?
"Oooo, this is terrible!" "You had better not let this thing be born!" "Dr. we need drugs, lots and lots of drugs!!!" "Look honey, you don't have to do this...there are other ways around this..." "Oh, the price you will pay for this is too high!!"

In her case, as in the Presidents...Leadership is absent of consensus

And even though it does not really matter to him, I would say to my President,
"I agree with you."
Property of Mayden' s Voyage at 3/21/2006

Young lady, this may have been your best post ever. Nice job.

Thanks Malinda! :)
I confess that I heard Rush say "Leadership is absent of consensus"...and it obviously struck a chord in me.

He was referring to a quote by Margaret Thatcher...who I like increasingly the more I read about her!:)
I will check out the GOP Bloggers site...thank you for passing it along to me! :)