The corner of my house

--
And the Critters who live there...

I took all of these shots this afternoon- then I called the kids out. We tried to catch the snake, but she got away. The praying mantis and the writing spider we left alone! 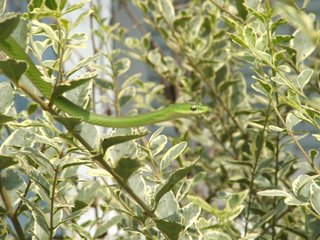 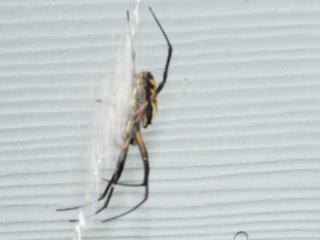 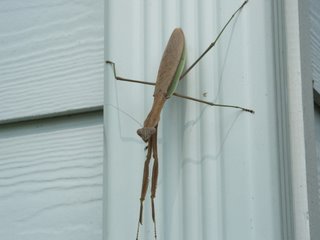 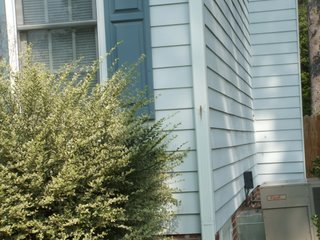 Reaching for a tasty meal?
Did she pray first? I think so! :)

The last pic shows the proximity of the wild life in my front yard.
The snake was in the bushes (dangerously close to that crawl space too- I might add!!!)
The Mantis was on the drain pipe next to the bushes, and the spider is in the corner on the far right- you can barely see her- but she was rather big!
Property of Mayden' s Voyage at 9/27/2006

dang, mayden, if we don't do the same stuff at times..:)
i'll post the pix of the afternoon i spent outside. I had intended to do it
later in the week.

gotcher e-mail. You betcha I didn't sell it t'someone else! That's why I wrote....just in case y'wanted me to.

And, as fer the critters....we ain't got any green snakes, but there are a small flock of garden snakes about this year.
Also have plenty of the other two....
Can never tell which is male and which is female with the mantids....
'Spect if I were a male mantis, I would pay attention to the information before yon female mantis drags me off fer dinner, though....

Enemy of the Republic said...

I don't think I'll be able to see ya in NY. I've been talking to our mutual New York friend about it. Sunday is the only possibility and I'm broke. Will you come again.

Sorry--I should email this and not waste a comment instead.

You are pretty brave. Even if it was just a little feller. I hope you don't have any rattlesnakes around your place. :)

Was this snake the inspiration for your story?

that's some
strange critters
you got down there,
mayden

kinda creepy, you know... i mean, they look like they're bigger than cats...

Oh, Mayden, I'm so glad you are enjoying all your wild friends! (even the "ugly" ones are beautiful) And getting close enough to take pictures! Wow!!
How great that you can share this with your kids...

Schaumi- I look forward to seeing your pic's :) I was about to start trimming the shrubs when Tim spotted the snake! The Mantis we had seen the day before and the spider has been living at the corner of the house for 2 weeks now- I'll have to start charging rent :)

SJ- yes, but not like the snakes where you live!

Boneman- Thanks- I appreciate you and your note and your talent.
I mailed your card yesterday afternoon :)

EOR- A comment from you is never wasted- and I got your note this morning. I am sure I will be in PA before too long- at least before spring...and it would be great if I could bring the kids with me too. I promise to let you know :)

Gary~ He was a cutie- and I've never seen a rattle snake in these parts- though I think there are some up near the mountains. The dangerous ones here are the cotton mouth, the copperhead, and the coral snake- and we have seen all 3 at one time or another. The little green garden snake was quite tame compared to the others :)

Crash Test- I think God made some of the female creatures more clever than others- hehehehe...
I'm kidding! :)

X~ I wish I could say it was- but no. If only apathy was as innocent as that little garden snake...

/t :) Strange critters? I grew up with these guys :) I'll bet you have a few in your area too-I remember the first time I saw an armadillo (sp?) in Texas. Everyone there thought they were so common- but I was way over excited about it- it was the first I had ever seen.
I wouldn't say that I "love" critters, but I am fascinated by them. I wonder if I'll see any in New York??? :)

Firebird- No doubt- I'm blessed. In every thing, in every way. Even though I come very close to loathing spiders- I don't mind them as long as they are outside...especially the writing spider. I have a kindred spirit with that one. The wolf spiders I detest and squash on sight. As for most every other bug, snake, or critter- if it stays outside, we're good! If it comes in the house- we've got trouble! :)

mayden-LOVELY pets you have there! (eeeeeewwww @ the snake!). & you're right, as long as they know their place (OUTSIDE!), and stay there, they're fine!

The "praying" mantis is nothing but a big phoney. Who doesn't behave in front of the camera ... when they're sober?

Pray tell, what kind of camera do you use to take such nice closeups? I am seeking a digital to catch the detail on the wings of my ducks.
Peace be to you

I am having a bit of a time getting used to these southern critters!

Libby- :) I like it best when the bugs know their place- and I remember mine when I'm out in their territory!

PW- Are you speaking from personal experience here? :)

Goatman- nice to see you! The camera is a Finepix S3100 by Fuji.
And I'm already wanting to upgrade it! But I'll have to wait another year to do so~ I think we got this one at Costco...very inspiring images at your blog- really nice! And the ducks are cute :)