I don't need to tell you it was beautiful~ not when I can show you :) 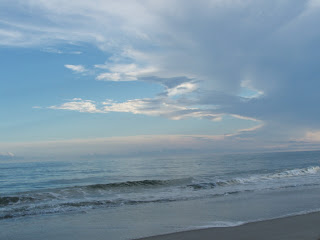 We were contantly under the "threat" of ugly weather, but it made for some of the most beautiful clouds I've ever seen. 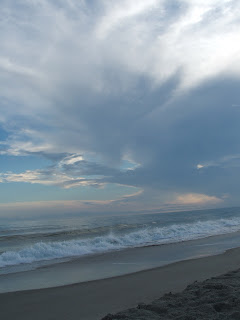 I received some bad news just before leaving- family stuff, and it was another reminder that we are continuoulsy under the "threat" of a storm. 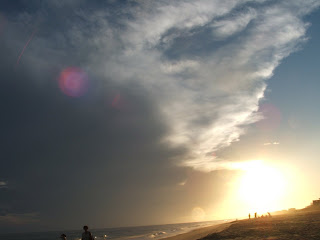 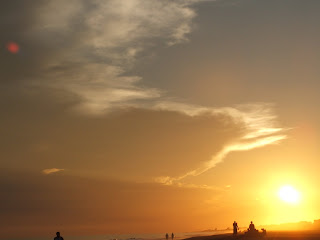 We went out- and sat in the sun. 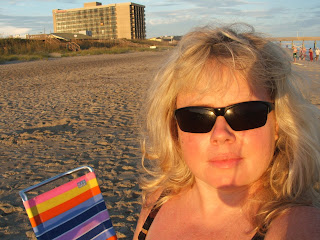 I turned pink :) A lovely glow that will last all week long. Of the 4 days of sun and moonlight- there was a total of 2 hours of rain. Barely enough time to get in a good nap!

On a serious note- the bad news has me out of sorts- and I tried not to think about it over the long weekend. Today- home alone, it's hit me rather hard. Everything will be ok eventually, but a marrige close to me is coming to a bitter end and all I can do is watch the thing die. It affects a lot of people, as a dying marriage is bound to do. I just don't understand it.

I understand the feeling of being trapped- but freedom from the promise one made is not the answer. Freedom comes from within. Making another person responsible for YOUR happiness is a brutal trap.

I understand the disappointment of a dream not becoming the reality one hoped it would be, but every day is a new chance to begin again. I understand apathy...but I don't understand letting it become the dominant force of your life.

I'm still growing up I think, and the lessons aren't getting any easier; but each sunset and potential storm mean more to me than the one before. I suppose Im headed in the right direction? 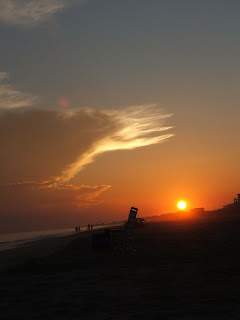 you are indeed my friend..and psssssssssst...I'll let you in on a little secret...we NEVER stop growing up and learning..
HUGS!!

That was a bit sugary wasn't it !

Leelee- I might need to move to the coast one day, but I fear I would go broke taking pictures :)

Kevin- lol- thank you :) Not too sugary- but definitely sweet ;)
I am lucky...to live so close to the ocean, and not too far from the mountains too. But you friend, you have castles nearby! :)
And I would give anything to see the English countryside- one day I will <3

gorgeous photos mayden! you also look like a vision in pink!


just poking around ... cleanin' up the old cobwebs ... i replied to your email. sorry to hear about what's troubling you. leelee's right. and ... its that growing part that hurts so damned much!

Me were gonna compliment you on the aesthetic changes you have made to yer house, but now that seems somehow frivolous since you be discussing something far more serious.

There are two sides to a marriage: an inside and the outside. Those on the outside will never know the goings on within the circle formed when two people come together and then part.

Mebbe it's better that way.

The completed circle is a dead thing, afterall.

I love your writing (And your new blog header). You've really - for me - kicked your style up a notch.

Scary nailed it once again. Although a completed circle CAN STILL be alive AND intriguing (Crop Circles, to cite one example).

I'm saddened by the end of any marriage, for whatever reason, especially among my friends. It's a devastating experience emotionally, financially, and often socially.

Then too, when some marriages ended, I felt that they should, especially when violence had been a part of a pattern of abuse. Sometimes people are implacable, unyielding, and they won't stop hurting those closest to them. It really does happen.

But even if there isn't violence involved, people can grow apart. Their decisions about what they need from life I have to respect and support.

You're right, of course, in that a bad divorce doesn't solve anything. But I've seen some pretty bad marriages too. I can't see how they solve much more.

My best wishes to your friend.

I need a coast trip.

Scary- I know...a dead thing. (And thank you for noticing the changes here at MV)- I'm guessing you know (now) who is involved in the divorce- even though I don't want to say so here. I did know what was going on "inside" the circle, but still hoped for a better outcome. Maybe this is for the best...and still it hurts.

Pug- thanks for the much needed smile here :) Crop circles! LOL <3

X- thanks friend- I appreciate you and your words~

Hammer- it was gorgeous and we had a great time...I could not have asked for more lovely weather- and the ocean was brisk, but not too cold for a swim. I wish I was going back again tomorrow! :)

wow spectacular cloud formation on 1 and 2..i may steal that as a reference for my "cloud portfolio"
(remember?)

you look HOT when youre pink and wearing solid black wayfarers!

were there any marines around to see?

sorry about the implosion near by.

wishing you well
throught this storm

I must admit, I look at the marriage vows and see them as oaths no person should ever swear.

They are unrealistic and cruel, in my opinion.
It's not surprising no one can live up to them.

I've felt trapped in most of the relationships I've been in, the ones that lasted longer than a couple of months anyway.

gorgeous pictures and a beach bunny to boot! Thanks for sharing!

Mmmm...I love the new header, too! Oh how I wish to be back on the beach...the leaves are already turning here in New York, and I am so jealous you were on the sandy shore. :)

This is Stan...I can't log in under my own moniker at the moment. For reasons that remain unclear.
A much improved blog lay out, Mayden. I like what I see.
Those photographs are superb...truly.
As for marriage, what I think is the recipe for success (besides all the whole faithful, yadda yadda yadda basics) is understanding that both parties will never completely agree on every subject and the art of compromise is critical. Both parties need to handle stress well and have some sort of capacity to work through it together.
That and not rushing into the marriage in the first place...
But there are certainly wrong ways in which to end a marriage.
Former Australian prime minister Paul Keating told his wife in front of friends at a dinner party that their marriage was over. Subtle, eh? I seem to remember that Rudy Guiliani ended his second marriage via press conference.Hmmmmm....

gorgeous new header, & cloud pictures, cora! and, were you talking about me? i'm crying as if you were...(sorry)

beautiful photos and LOVING the one of you with the sunset backdrop. ;)

The clouds are lovely.

Sorry about the friend's marriage.

You will eventually stop learning but you will be dead so I guess it doesn't matter.

She- I was "hot" allright! LOL- and sweaty too :) But thank you friend- it was a gorgeous weekend away, and much needed. And the Marines were as hot as ever!!! I was on constant look-out! :P

/t- thanks :) The sky was simply amazing-

Crushed- I'm reading you- and pondering what you wrtite...even though I'm invested in an 18-20 year relationship that's been mostly good- not a trap- at least not for me.

Amy- Oh friend, one of the true benefits of the south- the ocean in September and October are my very favorite times of the year.
Hope all is well with you- and I am long overdue for a visit!

Stan- in this case- it's my parents I'm speaking of. They are doing their best- it's simply hard for me to witness.

Libby- Big hugs friend...I need to send you a note!

Betty- you are so sweet- thank you :)

Lee- LOL- I indeed laughed out loud at your comment- and it was what I needed. Thank you <3

Making another person responsible for YOUR happiness is a brutal trap.

Wow, that is very well said! I imagine a lot of relationship troubles stem from that trap.

Thanks for sharing the beach pictures. Sigh. I miss it.

omg I soooo need to call you! I am way behind and you have soooo much that has happened while I was away! ugg


I hope that you are doing ok... I am thinking of you (and a bit worried too)

the new layout is beautiful. sorry to hear about the close marriage breaking up. hopefully you can spot some of the pitfalls they were tripped up by and avoid them yourselves. although you guys sound like you're looking at things from a different, healthier perspective to begin with.