All my family, except for a brother in San Diego, lives here in NC.

One sister, Naomi, lives in a small town near the mountains...about 3 hours NW from where I live.

She bought a house this summer, it was built in 1894...yes- I said 1894, While it has been renovated and restored over the last 113 years, she's been adding her own touches to the place and I had not seen it. We all wanted to go, so 15 members of my family made their way from central NC to the foothills of NC on Thursday morning.

(This is not her house, but it's similar)


The sky threatened a storm, but no rain fell. However, about 15 cars ahead of us- a driver in a pick-up truck on I-40 dropped a big black sofa on the highway!


I was sending text messages to friends when T slammed on the breaks! I jerked my head up from gazing at my phone to see 14 or so pairs of tail-lights- all glaring red- and all getting closer with each passing fraction of a second as they were all slamming on their breaks too! 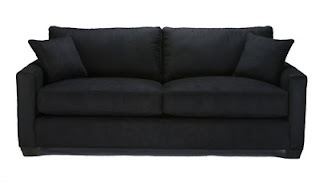 I hear the squash casseroles slide across the back of the 4Runner, as well as J's b-day cake...(her b-day was Nov 21)- but I'm more worried about whatever might be in the back seat of the car in front of me- seeing how we were all getting rather close to each other.


Sigh...in a matter of seconds the crisis was over. We passed the sofa on the highway- and everyone else managed to miss it too. In a few minutes we saw the offending (and pulled over) pick-up truck and the matching love seat. T suggested to the driver (telepathically?) - to TIE the F'n furniture down next time they wanted to move something on I-40...but I think I'm the only one who heard him :)


We arrived at my sisters house with no further incidents.


Until she went to warm up the creamy, delicious, cheesy, squash casserole I had gotten up at 7 am to bake.


It warmed up nicely in the oven- unfortunately when she took it out she placed it on a hot burner- and the dish BLEW up into about 1,000 pieces. Not only was that dish ruined, but also the one next to it- because of all the crunchy bits of glass in it. No one was hurt- thankfully, but there was pretty much casserole in all 4 corners of her kitchen, as well as some flung into the dining room. Yikes...


My rolls however, were a big success. They were fine to eat right out of the bag and fully protected because of their plastic covering. Thank goodness :)
The casserole you see below is one I made today- because damn- it ...I wanted some! (without glass in it, of course.) 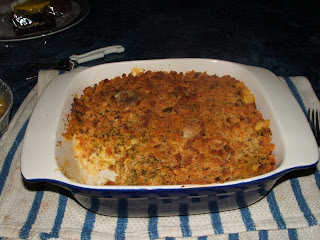 I didn't bake a turkey this Thanksgiving, and it's the first time in 18 years that I skipped that tradition. I did, however, make 3 squash casseroles (only 1 was eaten), a giant pot of beef stew, a breakfast casserole with sausage and 3 cheeses (below), and tomorrow I think I will make my first batch of fudge! I also got a surprise in the mail from my friend Foamy on Friday! Yeahhh! (thank you! I've already used the "lavender"!!!) Hugs for you friend...and fudge too when it's ready to send! 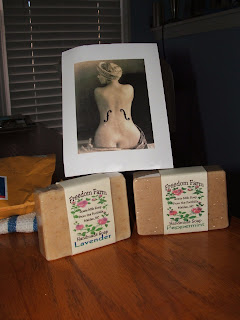 We all arrived and returned safely. No one said anything they will ever regret saying. No one had too much to drink, not at least until we were all back in our own homes :) I did have a toast for Scary Monster...but that's an inside thing :)

My sisters house is wayyyy cool. Both my parents, in spite of the divorce, were there and arrived together. I got to hold my 4 month old nephew again- and he smiled at me :) So what if the casserole didn't make it to the table- we had more than enough food :) 19 of my closest family members were all together for this Thanksgiving holiday...

I'm not sure I could have asked for anything more ♥~♥~♥

Oh Honey! Angels watchin' over ya!

I doan mind leftovers...can I come hep ya'll finish up all them good vittles?

Scary M- Amen on the plenty to be thankful for :)

Aunty-
Interesting note about your comment...the very first thing I said once we passed the spilled sofa on the highway was this whispered prayer,
"Thank you Lord for the angels that camp around us and keep us safe."
And, before the trip- as I do before EVERY trip- I prayed for journeys mercy- and safety...and that no one would argue or fuss on the way. (I always add that last bit- reminds all of us that we often need divine guidance when it comes to our attitudes and words!)

glad you are safe but sad over the exploding food - boo!

can i come and eat? it all sounds so delicious!

and yes, we had that same friggin heavy black cloud hanging over us that didn't drop a bit of rain.

next time you visit your sister let me know.

glad you liked the present. they were handmade from maiden, nc..
how could i resist? :)

Oh' Mayden.....would luuuuv' to have a taste of that casserole there!!..

curses to the casserole dish that couldn't stand the heat!! Least you have a good sense of humour about the whole thing :)

I'm glad you had a lovely time with your family.

(1) Note to self: if I ever wind up living in NC, watch out for sofas in the middle of the road.

(2) I'd almost forgotten about the naughty turkey. It does look funny.

(4) Is the Dylan Thomas post about whom I think it is?

what a
wonderful story!

i am reminded at once
of dylan thomas' a child's christmas in wales (now a holiday movie classic -- something to watch for) -- and arlo guthrie's alice's restaurant...

Thank heavens there wasnt any impact!

The food looks great and how fun to get a package!

Have a great week and lets catch up soon!

glad all was well.
happy that your parents made it to the gathering despite everything.
the food looks delicious!