(Pawpaw is in a rehab place near his home and seems to be on the mend ♥.   This blog post has been in the works since late June, but obviously I had other pressing things to attend to.   I hope you enjoy the following...I know I did!)

In late June it was time to begin the honey harvest.  My Bee Man, now 82, called me on a Sunday afternoon to say he would be taking hives apart on Wednesday or Thursday and inquired as to what day worked best for me.   Thursday suited me best and when the said day rolled around I packed my things, drove to his house in Oxford, and prepared to make over a half million bees very unhappy.   We had over 26 hives to take apart and no idea how many gallons of honey to process.

As with most summer days in the south, it was hot.   However, heat is an important element in harvesting honey, and while I wore light cotton clothing there was no getting around the fact that we would be hot and sweaty and tired by days end.   Bee keeping is not for the faint of heart, nor is it for those who need to be constantly comfortable.

We started off at a farm down the road from my Bee Man's home.   I was happy to see the complete process again for the 3rd year in a row.  This year, however, I saw for the first time what a "failed" hive looks like.   Mostly barren, with cobwebs and webworms in the frames, as well as indications that a mouse had moved in.   There were no bees in this hive.   It was like a haunted house- spooky, dirty, cobwebby, and deserted.   Creatures that aren't meant to exist in a bee hive had moved in and taken up residence, only to destroy a once beautiful and functioning home of a queen.

It's not unusual for a hive to perish, just as death is a normal end in all life cycles, yet I felt a profound moment of sadness.    My Uncle assured me he would clean up the hive and destroy the webworms (2 days in a deep freezer kills all pests in a hive)- and he'd have the hive ready for another colony.    The hive ghosts would be vanquished and that made me feel better.   The point of bee keeping is not entirely about the honey, although it's wonderful and worth every penny, the real purpose is managing a natural resource which is vital to our crops and has been failing for the last several years.   It's a hobby which benefits everyone in the community.  I can't say the same about my knitting projects!

The sweetest moment of the day soon followed.   After smoking each hive and using a product called "bee go" to clear out the bees, we took the hives apart and separated the supers from each other  (the bees return in less than 30 minutes so we have to work quickly).  We carefully looked at each frame inside to see if the honey was capped.  Sometimes the bees build up honey comb in between the top and bottom of the super, so when you pry one away from the other some of the comb breaks in half and a beautiful little puddle of honey will appear.   It is simply not possible to refrain from taking your hive tool (looks a lot like a paint scraper) and scrape up the honey puddle and freshly broken honey comb and pop it into your mouth.   It is heavenly.   Words can't describe how sweet and precious that first taste of the season is.   As I stood there, sticky, covered in sweat, hot beyond words, and with hours to go before we would be finished- all I could think was every single second I invest in this hobby- every sting- every dollar I spent, was absolutely worth the first taste of the honey of the season.   I can only imagine what manna tasted like, but I would be willing to bet it was sweetened with honey :)

Finally, at the end of the day, we had at least 20 supers full of honey.  Each frame in a super (there are 9) has to be uncapped with a hot blade and then placed in a centrifuge, but we saved that for another day.   Every super has to be bagged tightly and stored in a cool dark building until we can process it out.   We processed it out later the next week and within 2 weeks my Bee Man had sold all 40 gallons of honey his bees had produced!

The photos below are all images taken of my hive, the one in my back yard, while I was taking it apart and harvesting my own honey.   My hive alone had a gallon and a half! 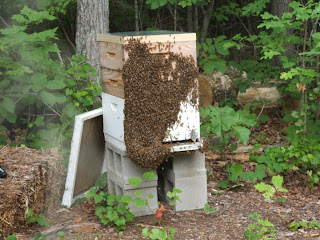 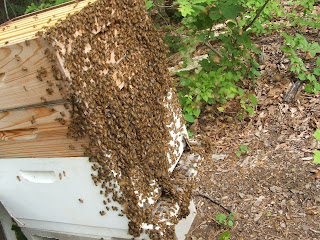 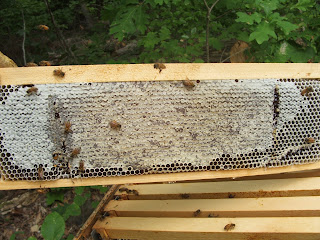 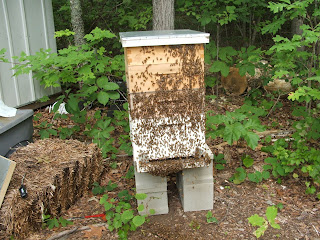 At this point I've removed the super and closed the hive back up-  many bees had already found their way home, or just hung around on the side and front of the hive. 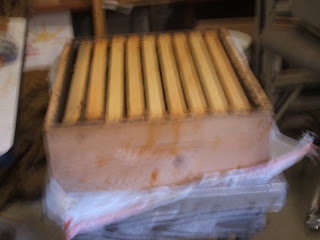 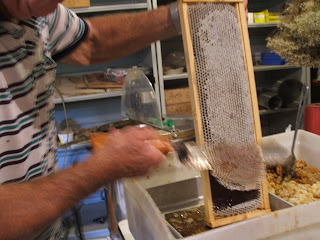 Uncapping the honey from my hive- 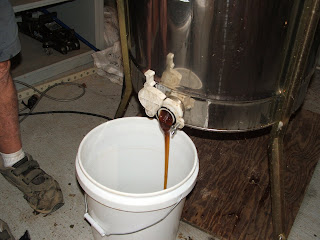 Spinning the honey out and watching it flow ♥ 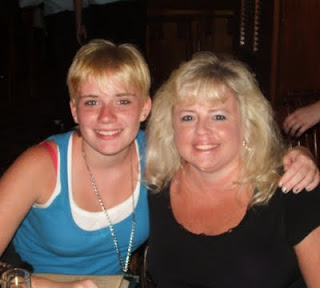 For more info about the bee deaths and what they think is causing it~
http://ecocentric.blogs.time.com/2010/10/07/the-riddle-of-the-bee-deaths-solved-at-last/
Property of Mayden' s Voyage at 7/21/2011

so much work by the bees & wonderful dedicated people for this amazing food! i love to see these pictures, it really brings it home to me what a tough & rewarding job this is!

I love it Libby- I'm so glad my Uncle took the time to teach me what he knows! Thank you!

(1) Interesting article. For some reason, I've always paired bees with insanity--probably because I see no logic to their movements.

(2) Glad to hear that Pawpaw is "on the mend." That's better news than the sweetness of the honey.

(3) JA doesn't look quite so pixieish.

I have admiration for bee keepers. I don't think I could do it. But I love the product. Since your uncle taught you, it's like a tradition being handed down in your case .. :)

Wow ... interesting and very cool. Glad Pawpaw is on the mend, hip surgery is major surgery!

somehow,
a gallon & a half
of honey just doesn't seem
sweet enough next to the mayden <3

That is awesome about Pawpaw! I am happy for you.
I am also impressed with the bee stuff too.
One thing I have always wondered about, is that how do the bees get the pollen or nectar from the flowers and make honey out of it. Is it really bee spit?
Jus askin.

Wow, that was very interesting -- didn't know there was so much to recovering the honey. I realize the bees aren't particularly happy about parting with the stuff, but the process is fascinating. Thanks for sharing that. Also glad your "paw-paw" is doing better.

Is it true you can work with no protective gear and they won't sting you?

This post encouraged me to look up more specifics about bees and was reminded that it was a symbol of royalty - and that, come to think of it, eating honey is like imbibing flowers...

Golden essence of flowers in a bottle - how lovely is that!


"Veiled in this fragile filigree of wax is the essence of sunshine, golden and limpid, tasting of grassy meadows, mountain wildflowers, lavishly blooming orange trees, or scrubby desert weeds.

Honey, even more than wine, is a reflection of place. If the process of grape to glass is alchemy, then the trail from blossom to bottle is one of reflection.

The nectar collected by the bee is the spirit and sap of the plant, its sweetest juice. Honey is the flower transmuted, its scent and beauty transformed into aroma and taste."
~ Stephanie Rosenbaum

Thinking of you Mayden dear, I hope you and your loved ones are safe from this dreadful hurricane in NC.
xoxoxo ♡

There bee a lot of work and love of it, that goes into this craft. May your bees have ridden out the storm as well as you all did ;-)