This is a re-post, but seemed fitting for today- 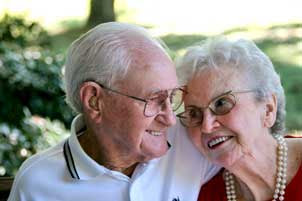 This morning, in a Hardee's restaurant, I stood in line behind an elderly couple placing an order. The lady told the cashier what they wanted and the gentleman paid for breakfast. Their 2 little biscuits and coffee cost $3.79.

As he opened his wallet to take out his cash, he pulled out a $50 bill in Mexican money (Pesos?) turned his head, and grinned at me. He said, "They won't take this stuff"- and I smiled and replied, "No, I don't think they will". After he paid, he turned to me again and took out a bill I didn't recognize. As he showed it to me he said- with an even bigger grin, "They won't take this either!" I asked him where it was from, he answered, "The Soviet Union". I laughed and said, "Well, you are just loaded aren't you?" He laughed too- and then shuffled off to follow his wife to their table.
I placed my order next. As I waited at the counter I turned to watch the elderly couple and I caught them at the exact moment they held hands, lowered their heads, and gave thanks for their food. Tears welled up in my eyes immediately. A thousand thoughts and feelings swept over me as I stood watching. I didn't know the human brain could process so many thoughts and feelings in such a tiny span of time, but it did. In a matter of seconds I went from thinking about my chicken biscuit to getting weepy over a couple of old folks who were merely doing what they've probably done for 50 years or more. It was beautiful.

I wondered about their life and I secretly wanted to interview them. However, that would have been a distraction for me because what was at the root of my tears had nothing to do with the life they've led, and everything to do with my own. I realized, with all my heart, I wanted an investment in another person that would pay out this kind of gold in my old age.

I want more than love, and passion, and adoration- I want *Nirvana. I want the finished product at the end of my life to be whole and unbroken- I want to be saturated and satisfied. I want the kind of bliss I saw this morning between 2 old people holding hands and giving thanks for their simple breakfast.
I think today, for the first time in my life, I saw the PRIZE. I saw it for what it really is and I feel utterly inept in trying to describe it. Even now as I sit here typing -the tightness in my throat and the tears on my cheeks are all I have to express how I feel.

I was called away and didn't get to ask the couple any questions, but I didn't need to. Sometimes the facts of a matter ding or tarnish the patina of feelings or sentiment. I didn't want anything to spoil what I was thinking and feeling- so I am at peace about not having the history of their life. (Although, if I ever see them again, I will ask :)

The Prize, exactly as I saw it this morning is Unconditional Love, both the giving and receiving of it. I'm aware Unconditional Love is different things to different people. For some of us it simply means keeping our word. For others it means giving up an organ, or taking care of another until the bitter end. The form of such love isn't universal, but the nature of it, how it makes us feel, and the way it sustains us- THAT is universal.


Having seen the Prize I know what to strive for. I realize I've experienced it a few times in my life- although often it seems fleeting - I'm determined to keep asking and reaching for it. At the same time I believe I must give it away freely before it will come back to me in abundance.


"Love" is one thing. "Unconditional Love" is something else entirely... I wish it for all of us.

Interesting. My parents are at that stage of life now, but to look at them thirty years ago, you'd wonder how they'd survive as a couple for another twenty-four hours. I guess it's hard to imagine that kind of life until you get to where they've gone together, when you've made the kind of history they have made.

Meanwhile, the present journey's what creates the investment, the romantic capital, let's call it. I hope that you have such a pension for your senior years.

Until then, I'm just going to wish you a Happy Valentine's Day.

And we wish it for you, Mayden.

You have yoreself SO together.

Wishing you all yore heart can hold.

A *HUG* for you and for a very touching post, Mayden. Alas, not all of us will find that investment that pays the dividend of unconditional love in our golden years. But for a geniune sweetheart like you, I do hope that you're one of those you've depicted herein. Your mate will certainly know the depth and warmth of your deep and passionate soul, this I am sure.

cora, i cried when i read this the first time you had it up last year, and it's still so meaningful!

Even old posts need to be taken out of storage and aired for public viewing.

X- I texted a few people on 2-14 and wished them a Happy VD! lol- I think it was you who got me started on that salutation a few years ago :)
I've thought a lot about what you said here- specifically about your parents and how difficult some seasons were. Your words give me hope. I think my parents divorce after some 38+ years of marriage has tainted me- in addition to seeing 2nd marriages that seem to be a better fit for a number of reasons. Some days I honestly feel I am holding my breath as time passes, much like a person holds their breath until the pain fades (after stubbing one's toe, for example). The curious thing is that I can not point to anything specific my spouse has done to cause pain...I think it's because of me and an "awakening" which has been coming for the last few years. When I get through this phase, and I will- things will be much better.
I am getting there. Thanks for the Valentine wishes...I send you a hug :)

Foamy, Happy, albeit late, Valentines Day to you too :)

Aunty, I am way overdue for a visit! thank you for being here :)

Dear Skunk- thank you for always knowing exactly what to say :) hugs to you too~

Libby- Thank you, I hope you have a great week ♥

NYD- "Keep the fires burning"- I will friend, thank you :)

"I realized, with all my heart, I wanted an investment in another person that would pay out this kind of gold in my old age."

There are a lot of us who would like that prize, but few are willing to put forth the capital and time to achieve it.

I had it once, but didn't know what to do to keep it.

I was googleing for images of an elderly couple and I stumbled upon this blog. All I can say is...Simplly Beaituful! I want the same and I will have this.

Onе ѕаggу boob said to the othеr
saggy boob: "If we don't get some support soon, people will think we're nuts."